The 2018-19 Ontario Hockey League’s rookie of the year came into his season with big expectations and an opportunity to be considered for the honours of going first overall in the 2020 NHL Draft.

Quinton Byfield is a unique player due to his size, and a combination of high-end skating ability and elite smarts. As an August birthday, Byfield is also one of the draft’s youngest players, adding an element of intrigue to his already sky-high potential.

That said, the 2020 draft is widely thought to be one of the best drafts in recent memory and Byfield has his work cut out for him if he wants to be considered for the top spot come June. While Byfield’s potential and play to date has almost certainly ensured he is selected in the opening few picks, the question of whether he could take the top spot away from consensus No. 1 in Alexis Lafreniere come draft day is still up in the air.

While it can’t be known who will go first overall in the 2020 draft until the selection is made, Byfield is an incredibly interesting and important prospect to get to know before draft day.

So what makes him elite?

And with such hype around his potential, what’s holding him back from being considered the top player in the 2020 draft already?

At 6-foot-4 and 215 pounds, you wouldn’t expect a human being to be able to skate like the wind or change direction at the drop of a hat, but that’s exactly what Byfield is capable of and part of what makes him so enticing. His unique combination of balance, speed, power and edge work sets Byfield apart from your average player and puts him in the upper echelon of players for the draft.

Thanks to his frame, Byfield has an incredible ability to skate through contact and maintain puck possession without losing a stride or much, if any, momentum. He maintains his balance by keeping his feet moving, leaning into contact and using powerful strides to push through the contact and get to where he wants to go. One of the best aspects of Byfield’s game is that he rarely has to deal with much contact to begin with in the offensive zone. His speed, edge work, and offensive deceptiveness allow him to gain the space he needs to work with when bearing down on the opposing net.

Byfield’s speed and agility can best be seen through transition as he loves to carry the puck through the neutral zone. Once he’s blown through the neutral zone, Byfield has the ability to drive the net, or circle the zone to allow his team to get set up. Whichever approach he chooses, he gets up to speed incredibly quickly through a powerful, explosive stride, getting his blades a number of touches on the ice in a short amount of time. His quick-strike ability leaves defenders either frozen while being driven deep into their zone or waving their stick like a wand at Byfield as he blows past them.

There are so many examples of Byfield’s explosiveness but here’s a great look of how fast he truly can be with the puck, scoring a goal against Guelph with two defenders hot on his trail.

One of the most incredible parts of the goal in the above video is that was Byfield’s first OHL goal and he was just 15 at the time. He’s become even faster, more powerful and his skating and conditioning have vastly improved in the year since. This is what makes scouts so tantalized by Byfield’s ceiling because he just keeps surprising with his continually increasing potential.

On top of being wickedly fast for his size, Byfield has a freakish ability to change direction at the drop of a hat. So not only is he hard to pin down because of how big he is, but he can also dance with a head fake, or a cutback. Good luck, defenders.

Seriously though, here’s a video example of Byfield slamming on the brakes and having a defender fly past him, then proceed to walk to the net and score.

Some players are incredible skaters, but their brains just can’t keep up with their feet. Byfield doesn’t suffer from this issue in the slightest. His superior intelligence aids his high-end skating ability as he is able to see the play two or three steps ahead and get to the right spots on the ice or get the puck to someone in the right spot on the ice.

His elite, ever-present intelligence and awareness sets him apart from the pack, and allows him to find passing lanes as well as teammates through heavy pressure. Some of the most impressive plays that Byfield makes are when he seems completely covered with no options and he pulls off a pass or a shot that seemed impossible.

Here’s an example of Byfield’s ability to find teammates through traffic and get them the puck utilizing that vision and creativity. Byfield enters the zone with control, uses his speed to burst around the defender who is too slow to pivot. While Byfield draws all the attention to himself, he spotted his linemate in the slot and reverses the puck for a pretty slick goal.

Playmaking is Byfield’s bread and butter. He can execute beautiful passing plays through the tightest passing lanes. Where most players have no business making a pass through a players stick for fear of coughing up the puck, Byfield uses this ability to create as much space for him and his teammates as possible.

Part of the way Byfield is able to create so much space for himself is his understanding of his skills and abilities as well as his creativeness. He can shoot, skate or pass the puck in a variety of different ways and his opponents know this just as well as he does. With this understanding Byfield can sometimes be afforded a bit of extra space to work with as he freezes players or makes them panic and make positional errors. This further aides Byfield in making spectacular plays as his quick decision making skills compliment his patience with the puck and really open up time and space for his teammates.

Byfield is an elite playmaker, but that doesn’t mean he’s a slouch when it comes to goal scoring. He has proven time and time again that he can put the puck in the back of the net in an increasing number of ways. Not only is Byfield able to score off the rush, but his silky mitts and creative genius allow him to score goals other players may not even attempt.

This goal is quite widely known by now and has been played on countless highlight reels. The between the legs goal at the Hlinka Gretzky Cup in August is one of the best examples of Byfield’s skill and creativity. It must be pointed out that Byfield was still 16-years-old at the time of scoring this goal.

Byfield can score on the backhand, forehand, on the rush, in the slot, the list goes on and on. Having said that, his shot is only slightly above average in terms of velocity. His release is fine as well, but his shot isn’t what makes him a better goal scoring threat than the next guy. His deceptiveness creates open ice for him to have more time to get into better scoring positions. He gives himself so many options through his ridiculous toolbox of skills, that defenders and goalies alike get frozen by him, as they aren’t sure where he’s going to be putting the puck.

Byfield is shooting the lights out with a nearly 22 percent shooting percentage and 57 points (22 goals, 35 assists). This also makes him far and away the top point getter of draft eligibles in the OHL through 30 games, and second overall in league scoring.

In addition Byfield is currently on a nearly two point per game pace. His shooting percentage at this rate likely isn’t sustainable, and is probably partly due to being so much more physically and mentally mature than his current level of competition. As with all NHL prospects, Byfield won’t get the same time and space at the next level as he does now. But the habits he’s fostering now, driving hard to the net or passing the puck to open ice rather than taking low percentage shots are what make him successful, and will make him a potent point producer in the NHL.

The following heatmap shows just how Byfield drives offence at 5v5. Not only can he score from a variety of different areas, he really excels at getting into the home plate and putting a ton of shots on net from the most dangerous areas of the ice. 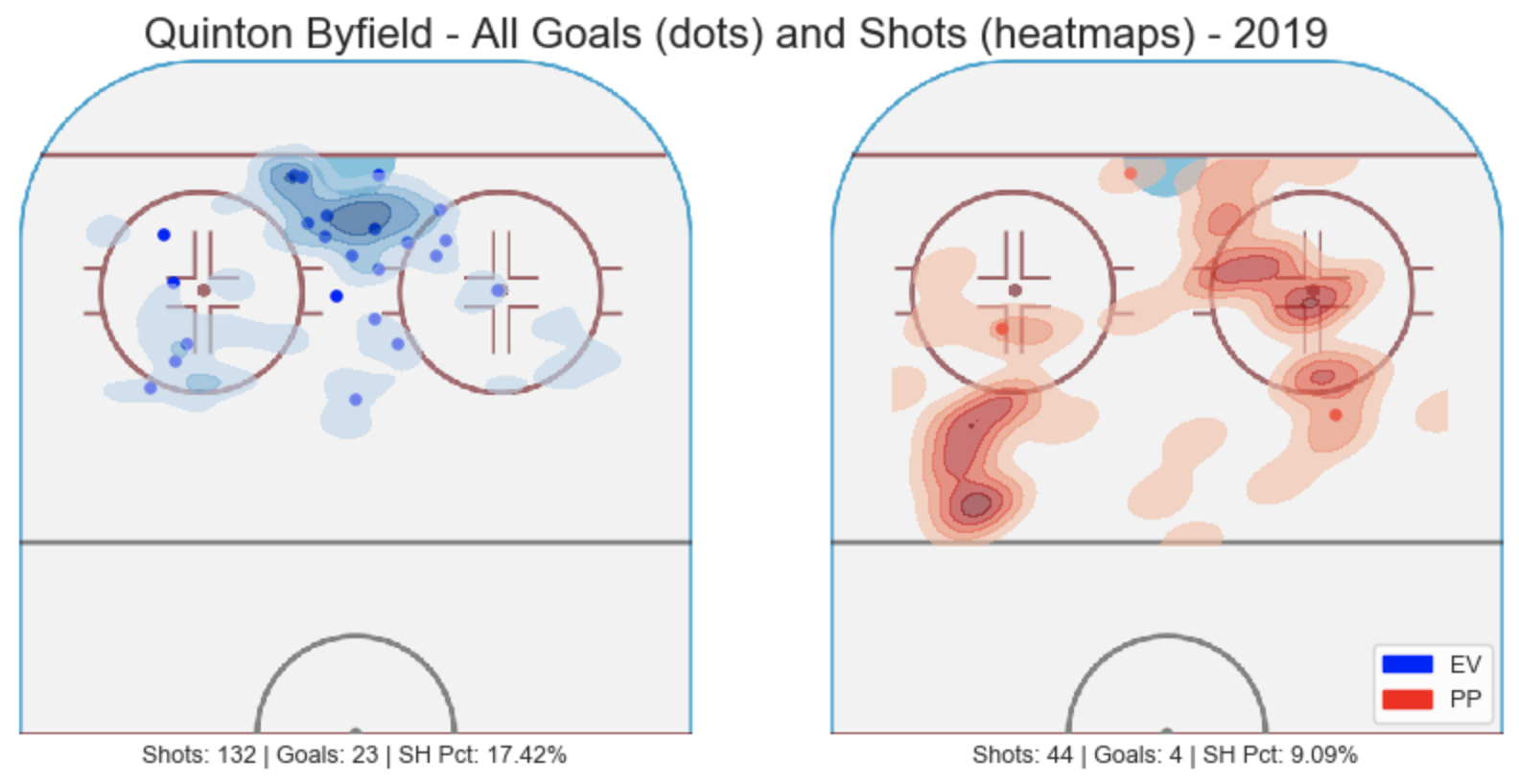 Another interesting statistical improvement in Byfield’s game is that last season he took a total of 176 shots, and this season has already amassed 101. This makes Byfield’s current shot pace at over 200 shots by the end of the season. In addition, should he maintain his current pace, Byfield is likely to surpass his goal totals from last season by approximately the halfway mark of the OHL season.

This shows Byfield’s willingness and ability to adapt his game to whatever his team needs him to be. Provided with shooters Byfield can become an elite playmaker, capable of creating some truly highlight reel assists. In his draft season, Byfield has transitioned himself to carrying more of the goalscoring load for the Sudbury Wolves and is doing a damned good job of it.

This type of offensive flexibility is a dream for teams, and makes Byfield even more enticing as a prospect.

Though Byfield doesn’t necessarily use his size to its fullest extent, he is able to utilize it to his advantage, and can grind to get to centre ice when need be. As mentioned, his powerful stride helps him fight off most contact and really enables him to make those drives to the net with the puck so much more effective.

That being said, Byfield isn’t the type of player to seek out contact and prefers to play a more creative style. On the back check and in the defensive zone Byfield can be found using his speed and stick more often than his body to separate players from the puck. And he is very effective at it.

Byfield possesses a solid defensive game and displays a high end 200 foot game for a player his age. In the following clip, highlighted by Future Considerations Ontario Regional scout Tony Ferrari, Byfield works his tail off reloading hard through the neutral zone to stick check his opponent on the rush.

Consistent defensive effort like this is impressive in a player that is considered to have so much offensive upside. That being said, it does appear that Byfield may be carrying too much of the burden for Sudbury. In a number of games this year Byfield has looked flat out exhausted. In a game in Guelph this season, Byfield struggled to break the puck in and was consistently shut down by the Storm’s defence in the neutral zone. Being a bit of a man on an island is starting to wear Byfield down it seems.

Still, the elite skill set that Byfield presents is one that is rarely seen in the draft and could result in him being taken first overall come June. Some players have size, some have skill, others have smarts. Combining all of those tools into one player, especially one of the youngest players eligible in the draft all but ensures the team that selects Byfield is getting a stud franchise center.