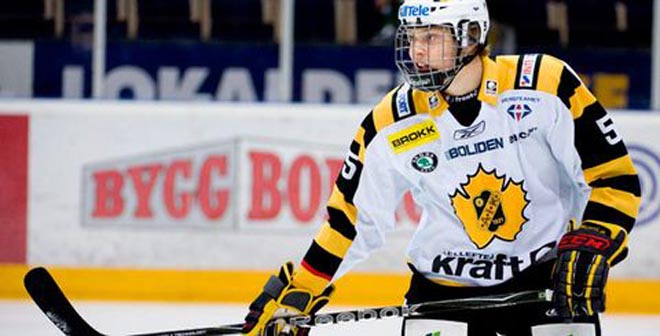 In the words of former New York Yankee and Hall of Fame baseball legend Yogi Berra, “This is like déjà vu all over again”.

That famous line from the iconic quote machine was said back in his days with the Yankees to describe seeing legendary hitters Roger Maris and Mickey Mantle hitting back to back home runs for the ‘Bronx Bombers’. Yogi would no doubt use that same famous line again had he been looking towards the 2011 NHL Entry Draft and how the top end could resemble the draft of two years ago.

Back in 2009, the top end of the draft was focused mainly on the OHL’s super sniper John Tavares and a big Swedish two-way defenseman, Victor Hedman, who was playing beyond his years in the top men’s league in Sweden.

All season long these top two prospects were being chased by a super skilled but just average sized, fleet footed forward in Brampton’s Matt Duchene who ultimately had the better first NHL campaign out of the three high profile rookies.

Fast forward to June 2011 and it could very well play out very much the same.

A high scoring forward going first overall in six-foot-four gangly Drummondville star Sean Couturier who led the QMJHL in scoring last season as a sophomore and has so much potential as a high scoring two-way NHL power forward.

A similar big bodied, two-way, and highly mature Swedish defender in Adam Larsson, who has been playing with Skelleftea AIK against men in the elite league since he was 16-years-old, is unquestionably a top two selection.

Add in Red Deer’s high scoring forward, Ryan Nugent-Hopkins who, if he can add some muscle and strength has been called a ‘can’t miss’ future NHL star, has a decent chance to develop into the best NHL player of the three; very similar to the way Duchene trumped both Tavares and Hedman’s performances in their rookie NHL seasons.

Couturier is a very big powerful lumbering forward with Tyler Myers type reach who when he first arrived on the scene with Notre Dame in Wilcox, SK. was a slow, awkward skater, similar to Tavares. Couturier has really worked hard to lengthen a stride and improved agility and foot speed to the point of it now being considered NHL average.

His offensive creativity, vision, sound hockey sense and puck skills make him a strong candidate to become a NHL all-star one day.

The six-foot-three Larsson’s ability to play a seemingly mistake free game at a high pace while contributing in both ends added to his ‘Lidstrom-type’ maintenance free style, something that the oft-injured Hedman lacked, Larsson is seen as a clear top two defender  in the NHL for the next fifteen years.

Nugent-Hopkins has a highly impressive skating stride with some unbelievable overall mobility, speed and agility which makes him in on most every play when he is on the ice. His playmaking skills are first line NHL worthy and his puck skills are just sick. Despite being a strong playmaker, Hopkins also boasts a deadly accurate wrist shot and a split second release. With all his offensive talent he can not be considered a one-trick ‘offensive’ pony by any means as his game incorporating some strong defensive ability and effort level as well. His current lack of size and strength are Hopkins only real weaknesses.

The second Swedish trained prospect to make his way into FC’s mid-season top ten is Kitchener Rangers power winger Gabriel Landeskog who checks in at number four after an impressive start to his draft year.

Landeskog plays a game best suited for North American play as he has been compaired to both Peter Forsberg and Tomas Holmstrom in his willingness to play hard, play angry and with a physical edge.

Standing at six-foot-one and just over 200-pounds, Landeskog is a sturdy winger who excells at working along the wall, digging out pucks and taking them to the net. He has the skills to beat you with finesse moves or by trying to take the puck through you on his way to the net.

Landeskogs’ willingness to go into and play in the dirty areas to create offense is not something that many young Europeans can boast on their resume. Leadership on the ice and in the room is another positive aspect of this hard nosed Swede.

Saginaw may have been the happiest OHL team during the off-season as they landed a potential top five NHL prospect when six-foot-two smooth skating power forward Brandon Saad signed on with the Spirit after a two year courting process. Saad was the USA U18 National Team’s top scorer last season and decided that the OHL was the best route to advance him in his goal of becoming a professional hockey player.

After selecting the skilled right winger in the first round of the 2008 OHL Priority selection Saginaw declined the option of releasing his rights to gain an additional second round selection in the 2009 Priority selection and the patience of GM Todd Watson and team Scouting Director Jim Paliafito is now being rewarded as Saad is in the midst of having a productive rookie OHL season for a contending Spirit squad.

The only tarnish on his record is that he failed to live up to expectations many had for him when trying out for the U.S. squad for the World Junior Championship in Buffalo.

Saad has a nice set of hands and an impressive shot that really makes him dangerous whenever he is on the ice and although he does not bull his way all over the ice he does use his impressive size to create chances and protect the puck extremely well. Those qualities along with his very good skating ability make him the number five prospect early with FC.

The next four spots are reserved for defenseman; three mamoth prospects in Niagara’s smooth skating defender Dougie Hamilton, Saskatoons Blades physical beast Duncan Siemens and Scott Mayfield who is playing for Youngstown in the USHL. The odd man out of these four is Ryan Murphy who plays with Kitchener of the OHL but only hits the vertical chart at five-foot-10 while the others are all over six-foot-three.

Hamilton played last August for the gold medal Canadian squad at the Ivan Hlinka Memorial where he was Canada’s most reliable two-way defender.

The six-foot-almost-five defender is strong defensively possessing great reach and sound positioning in his own zone and speed to close gaps. He also has some solid offensive upside to his game that is very attractive to NHL teams.

The biggest measuring stick of Hamiltons effectivness might just have come at last years U17 Challenge in Timmons, On. where Niagara missed the then 16-year-old more than anyone could have anticipated during the OHL games they were without him.

Hamilton has shown great improvment to his defensive game this season with plenty of upside yet to go and will be an integrical part of the Icedogs success this season.

Landeskog’s teammate in Kitchener, ultra-skilled but also smallish-sized defender Ryan Murphy comes in at number seven on the FC mid-season rankings. Despite having his detractors, Murphy remains high on most talent evaluators lists for the 2011 NHL Draft as someone who can run a PP and rush the puck end-to-end creating instant offensive from the backend.

Murphy has been off to one of the hottest starts, if not the hottest, of all the 2011 draft prospects with unheard of production for a defenseman.

He conjures up images of the best NHL’s past and present puck rushing defenders when he starts up the ice. His creativity, vision and natural skills are the best in the draft and if he were six-foot-two, 200 pounds and better in his own zone there would likely be no contest for top selection in the entire draft.

The fact that he gets pushed around a bit when fighting for position in his own zone and has yet to learn to balance his offensive game with playing sound defense have led to some questioning his game’s effectivness at the next level.

Siemens is a six-foot-three mean, physical defender with a great skating stride that really allows him to be strong defensively while still helping move the puck up ice on the attack.

His offensive abilities are just starting to surface and when he gains more confidence he has the potential to be a key two-way contributor at the next level.

His defense first style, strong ability to seperate the attacker from the puck at will coupled with a physical edge and willingness to drop the gloves while also possessing some untapped offensive upside make him one to watch.

Mayfiled of the Youngstown Phantoms is a hulking six-foot-four stay-at-home defender who skates well and plays with a real physical edge to him game. He also has some untapped offensive skill that have yet to be displayed in the role he has taken on with the Phantoms.

At the 2010 World Junior A Challenge in November, Mayfield was tabbed the tournament MVP in helping the Americans win top honors.

From across the Atlantic comes Joel Armia to round out the FC mid-season top ten, a power forward type prospect ripping apart the Finnish hockey world and SM-Liiga like not too many rookies have before. He started the year well at the Hlinka and then proceeded to not only make the Senior Assat team but become one of the top scorers in the entire SM-Liiga in the first half of the season.

Armia is a nice blend of size and skill that you don’t see coming out of Finland that often and has caught the attention of NHL talent evaluators.