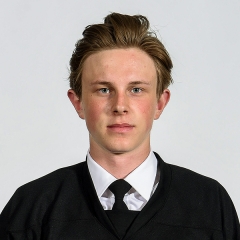 A big forward who plays a heavy, grinding game…an average skater, with decent acceleration, that moves well for a big man and gets from point A to point B effectively…a hard-hitting power-forward who throws his weight around…on the forecheck he uses his hitting and long reach to loosen the puck and cause turnovers…has a hard, rising shot and he gets a lot of chances around the net…has the hands and strength to win puck possession along the wall…active on the PK and in the defensive zone…pressures the point hard…looks good on a line with skill guys because he was able to create space for them and drive the middle lane to open up the outside…he gives an honest effort every time he touches the ice, whether it be with the puck, in the defensive zone, or on the forecheck…has the potential to develop into a top-six two-way power forward at the NHL level.