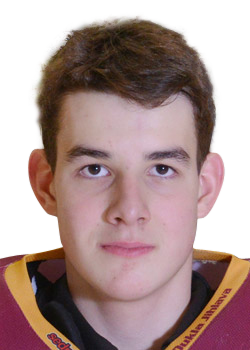 Skarek is a butterfly goaltender who plays an active, fearless game in the crease…he looks bigger than his size indicates with the way he attacks the puck through solid angles play…aggressive yet composed, and knows when to pick his spots when challenging shooters…very active playing the puck, with an ability to set up his team quickly on the breakout…makes things look easy, but he’s also willing to show his athletic sprawling, desperation saves when the time calls for it…battles hard in his crease and does not give up an inch when the play gets scrambled around him…quickly gets down and closes off the bottom of the net…pushes hard off his edges to make outstanding post-to-post saves off opponents cross-ice passes…very flexible and uses every inch of his body to makes saves…reads and reacts to the play well…has a quick set of hands and can close off net with either his glove or his blocker…finds pucks through traffic…has been impressive representing his country in international events…has the potential to become a starting goaltender in the NHL. (July 2017)