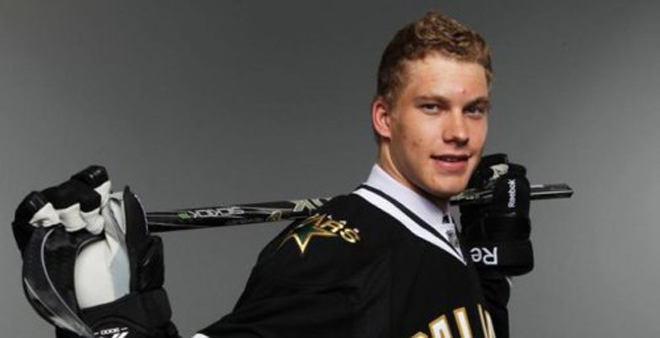 Home is where the heart is. For Jamie Oleksiak, Canada is home.

The six-foot-seven, 240-pound defenseman with both Canadian and American citizenship made that clear when he announced his intentions to skate in Hockey Canada’s National Junior Team Summer Development Camp a week ago.

The Toronto, ON. native made headlines when it was rumoured he would accept an invitation from Hockey Canada, declining USA Hockey’s offer in the process.

While he didn’t take the decision lightly, Oleksiak explained why his heart was in representing Canada.

“Just the fact I grew up in Toronto and lived there for the first 15 years of my life,” the 18-year-old said. “Every chance I get I go to Toronto and that’s where I grew up loving the game and grew a passion for the game. I still live in Toronto. It really feels like home to me. That’s where I feel the most connection.”

Though he was born in the capital of Ontario, Oleksiak’s father Richard was born in Buffalo, NY. Both parents, he said, have stood behind the decision.

“My parents were really supportive through the whole thing,” the former Chicago Steel standout said. “My advisors and my parents clued me into the facts and whatnot.”

Oleksiak, drafted 14th overall by the Dallas Stars in 2011, had previously been named to USA Hockey’s National Junior Evaluation Camp, taking place in Lake Placid, NY. He also attended the US National Junior Team’s selection camp in December 2010 as the second youngest player, but was among those cut from the eventual bronze medal-winning club.

He had also represented Team USA at the 2009 Ivan Hlinka Memorial Tournament. Because the International Ice Hockey Federation doesn’t sanction the event, Oleksiak wasn’t bound to play for the United States in international action by attending the event.

And while Oleskiak competed two years ago against some of his potential teammates, there were no grudges held against him, he said.

The guys have been great, really supportive,” he said, adding he hasn’t taken any criticisms over being a late addition to camp. “It’s been a great experience for me so far.”

Though he left to play hockey in the United States at 15, not all his potential teammates were strangers coming into camp. Oleksiak attended Crestwood Preparatory College in Toronto with brothers Dougie and Freddie Hamilton and came up in the Toronto Marlboros minor hockey association, a program that has graduated both Ryan Strome and Stuart Percy.

Oleksiak will have the opportunity to play against all four on a regular basis this season.

The last two months have been eventful for Oleksiak. In addition to being drafted in the first round and opting for Canada’s camp, the towering blueliner left Northeastern University for the Saginaw Spirit of the Ontario Hockey League.

Bringing him a little closer to home.