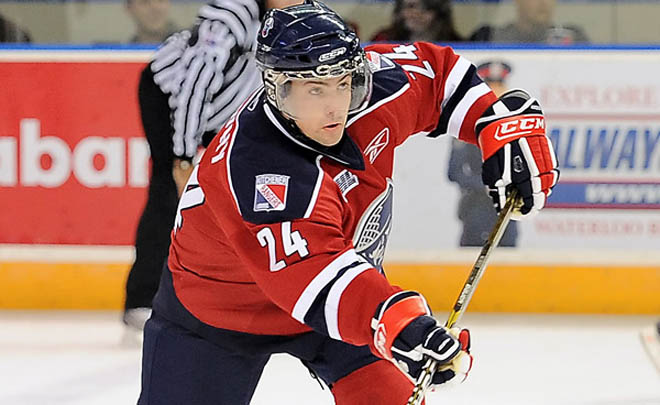 Ryan Murphy has survived the cuts and will start the season on the roster of the Carolina Hurricanes.

But he won’t be in the lineup.

Murphy, Carolina’s first pick, 12th overall in the 2011 NHL Entry Draft, will be a healthy scratch as the Hurricanes open the season Friday against the Tampa Bay Lightning.

The team is currently carrying nine defensemen, which could be an indication that Murphy isn’t in the long-term plans of the Hurricanes. It is more likely that the Aurora, ON. native will be returned to the Kitchener Rangers of the Ontario Hockey League at some point. It is more than likely Murphy gets a nine game audition before returning to the OHL. Once Murphy suits up for his 10th game of the season, the first year of his three-year entry level contract kicks in. Should Murphy play in 40 or more games, he moves one year closer to unrestricted free agency.

In four preseason games, Murphy recorded one assist. The five-foot-11, 176-pound blueliner had 26 goals and 79 points in 63 games with Kitchener a year ago.