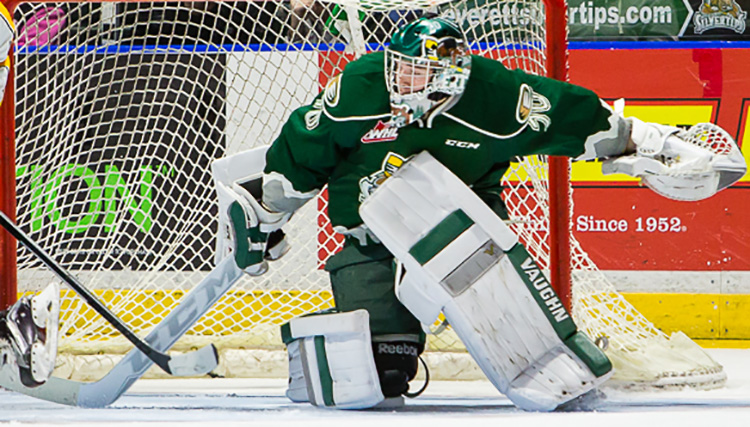 Carter Hart will have plenty of momentum heading into the 2016 NHL Draft.

The Everett Silvertips goaltender was named the Canadian Hockey League’s Vaughn Goaltender of the Year on Saturday.

“I had no idea,” Hart said. “It’s truly an honor to win this award and look back on some of the previous winners. There’s some pretty big names. I’ve got to give a lot of credit to my team in Everett. Without those guys…they pretty much made my job a lot easier and it’s nice to share that award with them, because they deserve a lot of the recognition as well by sacrificing their bodies every night for me and for the sake of winning.

“It definitely feels good to share it with them.”

Hart finished the regular season with a 35-23-1-3 record with six shutouts in 63 appearances. The 17-year-old finished second among WHL goalies with a 2.14 goals against average, the sixth-best save percentage at .918, and placed first overall in wins.

“Hart is one of the smartest and most consistent draft eligible goalies to come through the WHL in the last couple of years,” Future Considerations scout Zenon Herasymiuk said. “He doesn’t jump off the page with a flashy or aggressive style, but he meticulously manages his angles and is excellent at reading and reacting to plays. He always seems to make timely saves in a hockey game and he provides his team with confidence by playing such a calm and controlled game.”

The Sherwood Park, AB native is widely regarded as the top goaltending prospect available in the draft.

He’s not stressing about being the first goalie taken, though.

“That would be really cool, something special,” he said. “But I’m just hoping to get drafted.”

Finalists for the award included New Jersey Devils prospect Mackenzie Blackwood of the Barrie Colts and Chase Marchand of the Rouyn-Noranda Huskies.