He was certainly on the radar well before it, but Cole Perfetti created some major noise throughout the scouting — and broader hockey community — with an incredible eight-goal, 12-point performance for Canada at the 2019 Hlinka Gretzky Cup.

Perfetti came into the tournament as an already highly touted prospect, slotted at No. 8 in Future Considerations’ Preliminary ranking for the 2020 NHL Draft — the second-highest ranked Ontario Hockey League skater.

Perfetti’s performance at the Hlinka isn’t simply a hot streak over the course of a short tournament. He scored 37 goals and 74 points for Saginaw in his rookie campaign; an impressive feat for a player who was just 16 for nearly half of those games. The No. 5 pick in the 2018 OHL Priority Selection has consistently proven to be a high-end talent through his entire career to this point and it doesn’t look like he will be slowing down any time soon.

So who is Cole Perfetti?

What is he good at?

What are some of the things he needs to improve on over this season to improve his draft stock?

Without a doubt, Perfetti’s greatest skill is goal scoring, mostly due to him owning one of the best shots among 2020 eligibles. A number of things make Perfetti a reliable scorer, but first and foremost, it’s his accuracy with the puck and ability to get it up high quickly in tight. In addition to his shot’s accuracy, Perfetti displays an innate sense of a goalie’s weak spot and can pick a netminder apart in a number of different ways.

This was best displayed when Canada played Sweden at Hlinka where Perfetti scored five times.

This shootout goal displays all of these skills Perfetti has when coming in on the goalie.

These goals from Perfetti show how adept he is at reading a goaltender on the fly, as well as the number of different ways he can score. The puck gets off his stick in a flash and he also shows off that release on both the forehand and backhand.

The other thing that makes Perfetti an elite goal scorer, and potentially one of the reasons he might sneak his way into that top tier of prospects in the 2020 NHL Draft, is his ability to get himself and the puck to the middle of ice.

Here is a heat map of all of Perfetti’s shots and goals at both five-on-five and on the power play in his D-1 season with Saginaw. 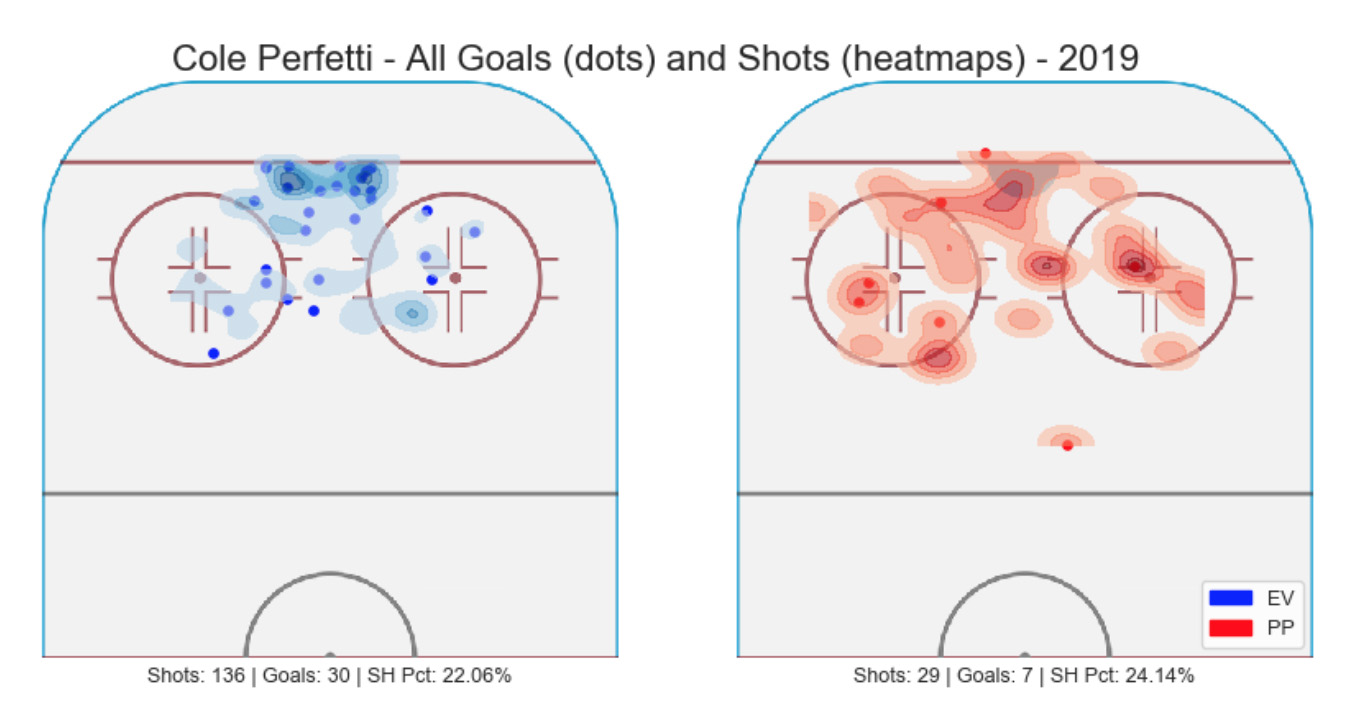 Virtually all of his shots at even strength come from the home plate section of the ice, with the biggest cluster being right in the slot and goal mouth.

This is, in addition to his 22 per cent shooting rate, evidence of an elite goal scorer. At the next level he will have a much harder time getting to this area of the ice due to better competition, however this skill of getting to the middle of the ice is one of the most key pieces to becoming a reliable goal scorer.

Though Perfetti’s shooting percentage is high, at 22 per cent, it’s also possible that he will routinely be a higher percentage shooter thanks to his NHL calibre shot. Perfetti attacks the net with excellent speed and agility that he really forces the netminder to show their weak spots, and he’s fast enough to capitalize on those instances. The puck comes off his stick and elevates so quickly, it’s hard for goalies to seal off the amount of net they are used to when dealing with the ‘average’ shooter.

Perfetti is prolific at scoring goals, but that doesn’t mean he isn’t also a highly adept playmaker as well.

On this power play, Perfetti completes three passes, creates time and space for himself and his teammates by drawing opponents to himself and forcing them out of position, and then gets back into position for the next attempt.

In the above clip, like a shark toying with his food, you can see Perfetti constantly watching and feeding off of the lanes he’s being given by his opponents.

As he slides down through the middle of the ice his line to the net is cut off and he smartly circles back. He then uses his defender as a bumper at the blue line to generate speed, pulling opponents to his position when he gets the puck back on his stick, immediately recognizing his teammate has been left alone at the side of the crease.

These playmaking and goal scoring abilities described above are tied to Perfetti’s best assets: vision and smarts.

Perfetti’s ability to consistently put the puck in the net comes from his elite hockey IQ and smarts in the offensive zone. Watch here how Perfetti recognizes a hole in his opponent’s coverage of the middle of the ice, then takes a few quick steps to offer his teammate support through an outlet pass off the side wall.

Perfetti’s recognition of where he needs to be on the ice to support the play here is displayed often and is why he is able to get to the dangerous scoring areas in the offensive zone.

The knock on Perfetti’s game to this point has been his skating.

Though his skating lacks a bit of dynamism, his North-South speed is quite solid at full stride and he is able to create some separation on the breakaway. In his straight away skating, Perfetti utilizes short quick strides keeping his legs wide and getting to the inside of his blade to push off with above average speed. Here is a great look at his skating ability in wide-open ice.

His low, wide stance with quick steps helps him get more touches on the ice, giving him the ability to pull away from your average skater. On top of excellent North-South speed, Future Considerations scout Sam Stern provides further insight on why Perfetti can be so elusive with the puck:

“One of the things I love about Perfetti is aside from being a fast skater is how proficient and explosive he is from side to side,” Stern said. “I don’t mean so much his ability to go East-West in long distances so much as I mean how he makes these explosive, short movements from side to side to cross up defenders.

“He does it so quickly that it almost creates the illusion that his reach is longer than it is.”

Perfetti uses cuts and sharp movements to change directions on a dime and can really break some defenders ankles when he does this. In addition, he also utilizes a solid low centre of gravity to generate excellent balance and really dig in those edges, making him hard to push off the puck. This puck protection ability makes it much easier for him to keep defenders slightly off balance and really drive hard to the slot.

To nit pick a bit, his first few steps aren’t the quickest, and that seems to come from a habit of gliding fairly often. This habit though not necessarily detrimental to his game, seems to make it hard for him to quickly jump into a faster skating stance and makes those first steps a little more effort.

You don’t become as good a player as Perfetti is without having a bit of a competitive edge to your game. He displays this when it comes to getting to the net. Perfetti is relentless on the puck and he really digs in, gets low and pushes his way to the crease, especially with the puck on his stick.

As an offensive dynamo, Perfetti doesn’t see a lot of ice time in his defensive zone, but even still, his defensive game is actually pretty solid. He doesn’t kill himself on every defensive play, but he definitely puts in the effort and always jumps on the opportunity to regain possession of the puck.

One memorable defensive play by Perfetti at the Hlinka Gretzky Cup was when a Finnish player was carrying the puck out of his defensive zone. Perfetti made a diving stick check, poking the puck back into the Finnish zone, got up and continued to apply pressure to the player with the puck. This effort level in a game that was early in the tournament and already decidedly over just goes to show how relentless Perfetti is on his opponents, and in pursuit of the puck.

In addition, on the passing play shown in this article above, Perfetti continuously jumps on the loose puck and turns the play around on the Russians putting a ton of pressure on the Russian goaltender Askarov, who unfortunately for Perfetti, was up to the challenge.

In all, these are just a few points on what makes Perfetti the incredible talent he is, and how he has set himself up to go head to head with Quinton Byfield for first prospect off the board this June.

If Perfetti can use his success at the Hlinka tournament to continue producing at an elite level and continue improving his game throughout his draft year he will be setting up an incredible race for fans.