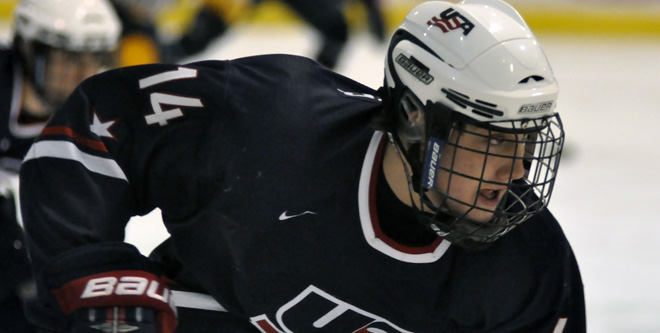 College hockey has lost another player to the Canadian Hockey League.

Reid Boucher, who has another year of high school, has de-committed to the Michigan State Spartans in favour of the Ontario Hockey League. The leading goal scorer for the gold medal winning United States at the World Under-18 Championship is expected to join the Sarnia Sting.

The native of Grand Ledge, MI. was expected to head to the United States Hockey League before joining Michigan State in 2012/13.

Boucher led the NTDP with 14 goals in 24 games in the USHL. In 57 contests last season, the New Jersey Devils draft pick had 32 goals and 54 points in 57 games.

Connor Murphy, also with the National Team Development Program, de-committed to Miami University to join the Sting earlier in the week.

Boucher joins teammate John Gibson and JT Miller as recent collegiate committees who have opted instead for the OHL. Gibson will join the Kitchener Rangers, while the Plymouth Whalers have added Miller’s services. Dual citizen Jamie Oleskiak, formally of Northeastern University, has also left for the Saginaw Spirit.